The term Robotics simulation can refer to several different robotics simulator applications. For example, in Mobile robotics applications behavior-based simulators allow users to create simple worlds of rigid objects and light sources and to program robots to interact with these worlds.

One of the most popular industrial applications for robotics simulation is for 3D Modeling and Rendering of a robot and its Environment. This type of robotics software has a simulator that is a "virtual" robot, which is capable of emulating the motion of an actual robot in a real work envelope. Some robotics simulators, such as RoboLogix, use a Physics engine for realistic renderings and movements of the robot in 3D space. Physics engines provide precise physics models with variables such as Mass, Velocity and Friction, and can simulate and predict effects under conditions that approximate the real world. The use of 3D robotics simulation for development of robotics programs is highly recommended regardless of whether an actual robot is available or not. The simulator allows for robotics programs to be conveniently written and Debugged Off-line with the final version of the program tested on an actual robot. 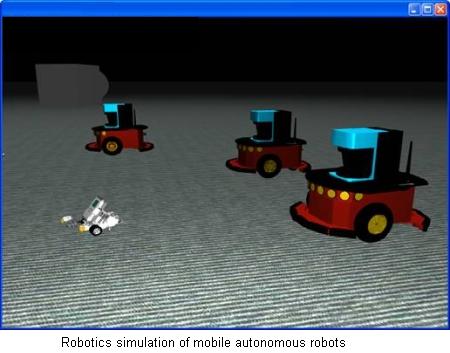 In order to fully understand the operation of a robot, it is necessary to test, run, and debug programs that you have written yourself. Learning how to program a robot requires practice with the equipment and the capability to learn by trial-and-error. In robotics laboratories or in manufacturing applications, access to equipment is limited and there are few trial-and-error experiences possible due to the risk of injury to personnel and/or damage to equipment . Most Colleges and Universities offering robotics training generally have a small number of robots, since the cost of each robot can be over $100,000.

Robotics simulation software is an increasingly popular method of bridging the gap between robot theory and "hands-on" programming. With robotics simulation software, such as RoboLogix, the user can run the simulator to test and visually examine the execution of robot programs and Control algorithms, while plotting instantaneous joint accelerations, velocities and positions. Simulation software allows for verification of the reach- ability, travel ranges and collisions. This provides increased reliability of the planning process and program development as well as reducing the overall completion/Commissioning time. Robotics simulation software enables programmers to write their own robot programs, modify the environment and use the available sensors. With RoboLogix, these sensors include Video cameras which are used for obtaining the desired position of the robot end effector. 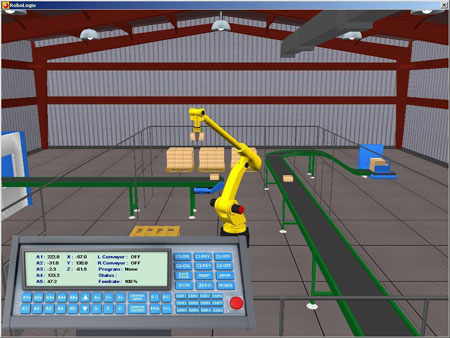