RoboLogix introduces the concepts of multi-axes robots and demonstrates how they can be used in a plant or manufacturing system in various 3D simulation environments. The primary focus of the software is on automated manufacturing processes and allows for the programming, testing, and debugging of robot programs. Users gain practical, "hands on" programming of an industrial robot through a combination of teach-pendant programming, and 3D simulation environments. These environments include conveyor/palletizing, pick and place, spray painting and welding. 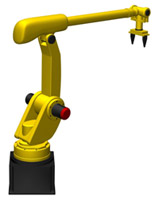 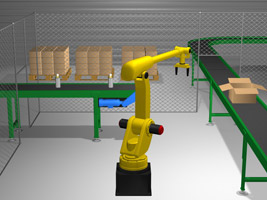 The ability to preview the behavior of a robotic system in a "virtual" world allows for a variety of mechanisms, devices, configurations and controllers to be tried and tested before being applied to a "real world" system. RoboLogix receives control signals, determines if contact or collision between objects in the system has occurred, and returns simulated sensor information as feedback. This system has the capacity of real-time simulation of the motion of an industrial robot through 3D animation. The principles of 3D motion simulation and both geometry modeling and kinematics modeling are presented in the RoboLogix virtual environment.

The simulation functions of RoboLogix include: 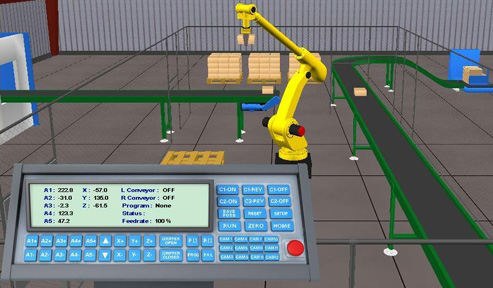 Motion control of the robot is accomplished by moving the robot from one location (position) to another. This movement is achieved by setting the angular (A1-A5) coordinates and the linear (X, Y, Z) coordinates. Generally, angular position movements are commonly used for large (course) motion and linear position movements are often used for smaller (fine) increments.

The Emergency Stop button is indicated by the large red button on the control panel. When this button is activated, power is interrupted to the entire work envelope including the robot, conveyors, and any other equipment operating in the immediate vicinity of the robot.

RoboLogix provides 12 viewpoints, or camera angles, for a given robot work envelope. These viewpoints are accessed by the twelve CAM keys and allow for the viewing from a variety of angles and perspectives. By using these camera viewpoints, the user can move around in a 3D world in much the same way they would in the real-world. When programming the robot, the camera views allow you to make fine adjustments to the arm and gripper position, or to view the entire work envelope and surrounding area.